"People are like stained - glass windows. They sparkle and shine when the sun is out, but when the darkness sets in, their true beauty is revealed only if there is a light from within."
—Ambrogio to Selene.

Ambrogio (アムブロージーオー, Amuburoojiioo) is a ancient age-old vampire, formally a human from Italy before becoming a pure-blooded vampire by the Olympian, Artemis in order to have Selene not perish.

Being of the earliest vampires, Ambrogio is powerful vampiric being. Having been born sometime in the 13th century BC, and survived the Greek Dark Ages when he became a vampire in 1410 BC.

Sometime in the 21st century, Ambrogio is attaining Yokai Academy as a student.

The Temple of Apollo[]

Ambrogio was a young adventurer. Born and raised in Italy, he had always longed to travel to Greece to have his fortune told by the Oracle of Delphi. When he was an adult, he got on a boat and sailed to the western edge of Greece, near Astakos. He traveled east until he eventually reached the city of Delphi.

Delphi was home to a great temple of Apollo the sun god. It was also the home of the Pythia, better known as the Oracles. The Pythia would sit in a chamber within the temple and speak of prophecies, inspired by Apollo, to those who came to seek the Oracle's wisdom.

When Ambrogio finally arrived at the temple, he went to speak to the Pythia. The Pythia, whose words were often cryptic, said only a few words: "The curse. The moon. The blood will run."

He couldn't sleep that night. He stayed awake outside of the temple, pondering the meaning of the Pythia's words. As the sun rose in the morning he realized that he had not slept. As he walked back toward the town he saw a beautiful woman dressed in white robes walking to the temple. He ran over to her and introduced himself.

Her name was Selene, and she was a maiden of the temple. Her sister was the Oracle, and so Selene tended to the temple and took care of her sister while in her entranced state.

For the next few days every morning Ambrogio met Selene at dawn before she entered the temple, and they soon fell in love.

On his last day in Greece, Ambrogio asked Selene to marry him and return with him to Italy. She agreed. He said he would make the preparations then meet her at dawn the next morning at their meeting spot outside the temple.

Apollo, the sun god, had been watching. He himself had taken a liking to the beautiful Selene and was enraged that Ambrogio would come to his temple and take one of his maidens away. At sunset that night, Apollo appeared to Ambrogio and cursed him so that from that day forth a mere touch of Apollo's sunlight would burn Ambrogio's skin.

Ambrogio was distraught. He was set to leave with Selene in the morning, but he would not be able to meet her at sunrise as he promised because of the curse. Having nowhere else to turn, he ran to a cave that led to Hades for protection. Hades, god of the underworld, listened to his tale and made him a deal - if he could steal the silver bow of Artemis and bring it back, Hades would grant him and Selene protection in the underworld. The deal specified that Hades would give Ambrogio a magical wooden bow and 11 arrows to hunt with. He was to offer his hunting trophies to Artemis in order to gain her favor and steal her silver bow. As collateral, Ambrogio had to leave his soul in Hades until he returned with the bow. Should he return without the silver bow, he would have to live in Hades forever, never to return to Selene. Having no other choice, Ambrogio agreed.

He had no way to contact Selene. He had parchments, but no writing implement, so he took his bow and arrow and killed a swan. Using its feather as a pen, and its blood as the ink, he wrote her a note explaining that he could not meet with her but would find a way for them to be together. He left the note in their meeting place and ran off to find a place to hide from the sunlight.

Naturally, Selene was devastated when she found the note, but she kept working at the temple as she did not want to anger Apollo any further. The next morning, Selene went back to the meeting place, but once again Ambrogio was not there. She saw another piece of parchment with writing in blood on it. It was a love poem from Ambrogio.

Before morning for 44 days Ambrogio slew a swan and used its blood to write Selene a love poem. After draining the blood and taking a single feather he offered the body of the swan as a tribute to Artemis, the goddess of hunting and the moon, and also sister to Apollo. He hoped that even if he could not steal her bow, she would be honored by the tribute and would be able to convince her brother Apollo to remove the curse.

On the 45th night, Ambrogio had only one arrow left. He shot it at a swan and missed, the arrow sailing into the distance. He had neither the blood to write Selene's poem nor the swan to sacrifice to Artemis. He fell to the ground and wept.

Seeing how good of a hunter and how dedicated of a follower Ambrogio had been, Artemis came down to him. He begged Artemis to let him borrow her bow and an arrow so he could kill one last bird and leave one final note to Selene.

Artemis took pity on him and agreed to let him borrow her silver bow and an arrow. He took the bow, and in desperation, ran to the cave that led to Hades. Artemis realized what was happening and cast her own curse on Ambrogio. The curse caused all silver burn his skin. Ambrogio dropped the silver bow and fell to the ground in pain.

Artemis was furious at Ambrogio's deceit, but he begged her for forgiveness. He explained the deal he was forced to make with Hades, his curse by Apollo, and his love for Selene. He apologized profusely and swore that he had no other choice.

Artemis took pity on him again and decided to give him one last chance. She offered to make him a great hunter, almost as great as she was, with the speed and strength of a god and fangs with which to drain the blood of the beasts to write his poems. In exchange for this immortality, he would have to agree to a deal. He and Selene would have to escape Apollo's temple and worship only Artemis forever. The catch was that Artemis was a virgin goddess, and all of her followers had to remain chaste and unmarried, so Ambrogio was never allowed to touch Selene again. They could never kiss, never touch, never have children.

Ambrogio agreed. At least this way he and Selene could be together. He killed another swan and left Selene a note telling her to meet him on a ship at the docks. Before dawn the next morning, she saw the note and ran away before Apollo could notice.

When Selene arrived at the dock she found Ambrogio's ship and met him down in the hull. There was a wooden coffin with a note on it, telling her to order the ship's captain to set sail, and to open the coffin only after the sun had set. She did as the note said, and after sunset she opened the coffin to find Ambrogio alive and well.

The couple sailed to Ephesus, where they lived in a cave during the day and worshiped Artemis at her grand temple every night. They lived happily together for many years, never touching, never kissing, never having children.

After a number of years, Ambrogio's immortality allowed him to stay young, but Selene continued to age as a mortal. She finally fell ill and was on her deathbed. Ambrogio was distraught, knowing that he would not join Selene in the afterlife because his soul still resided in Hades. At night, he went into the woods and found a white swan swimming alone in a small lake. He killed the swan and offered it to Artemis, begging for her to make Selene immortal so they could stay together forever.

Artemis appeared to him. Thankful for his years of dedication and worship, she made him one last deal. Artemis told Ambrogio that he could touch Selene just once - to drink her blood. Doing so would kill her mortal body, but from then on, her blood mixed with his could create eternal life for any who drink of it. If he did this, Artemis would see to it that they stayed together forever.

Ambrogio wanted to refuse, but after telling Selene what happened, Selene begged him to do it. After much convincing, he bit her neck and took her blood into his body. As he set her limp body down, Selene began to radiate with light, and raise up to the sky. Ambrogio watched as Selene's glowing spirit lifted to meet Artemis at the moon. When she arrived, the moon lit up with a brilliant light.

Selene became the goddess of moonlight, and every night she would reach down with her rays of light to the earth and finally touch her beloved Ambrogio as well as all of their children - the newly created vampires who carried the blood of Ambrogio and Selene, together. 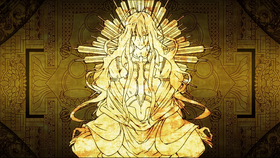 Godhood: After obtaing the Spear of Destiny, Ambrogio has attain Godhood status, vast being a Vampiric divine being beyond the limitations of vampires such as the negation of the weakness of water.

𝗦𝘂𝗽𝗲𝗿𝗻𝗮𝘁𝘂𝗿𝗮𝗹 𝗖𝗼𝗺𝗯𝗮𝘁:Ambrogio is extramly skilled in combat easily throwing and kicking around most opponents with little to no effort also being able to match or even surrpass gods in combat alone.

Spear of Destiny: The legendary divine spear said to had pierce Wikipedia:Christ on the cross. While its unknown when or how Ambrogio obtained such as a relic of divine power, he is capable of manipulating the vast divine forces to his will to achieve any form of spellcasting or empowerment. This relic is one of the many Divine Constructs that is fatally poisonus to any yokai.

Community content is available under CC-BY-SA unless otherwise noted.
Advertisement