There are very few X-Class Yokai. Children of Alucard are usually S-class monsters, but his third son is an X-class monster. He is a vampire dragon/incubus

Mummies - undead who have to sustain a form of curse, and they gain immortality, and powers of the desert.

Guyver - alien who have to transform into armored clan superhero and powers of a experiment.

Wraiths - elemental human souls that wander the earth until they are to be judged in the afterlife.

Lich - humans who sold their soul to demonic forces, turning them into skeletal monstrosities with sinister, evil powers.

Titan- elemental giants who possess immense physical and magical powers, and are only capable of being killed by another Titan, or a human.

Rainbow Serpents - large, divine, reptillian creatures, who can control the forces of rain, and storms.

Nightwalker - formless demons, which often resemble large humanoid beings made out of pure darkness, with the power to drain life simply by touching another creature.

Dragons - A dragon is usually an elemental creature, typically with serpentine or reptilian traits resembling a dinosaur with wings, capable of using magic and usually breathe their element.

Nexus and Alpha Elder Wolf-An Alpha Elder-Wolf is the alpha version of a elder wolf and the nexus is the nexus version of an elder-wolf. An Elder Wolf is a different type of werewolf. They are a larger and faster version and they also have strength comparable to that of a vampire. Alpha and Nexus are advanced forms of any werewolf.

In order for a Yokai species to become X-Class, a member of a one kind of species must defeat another member in a fair fight in a battle of powers. If one defeats an X-Class Yokai in such a fight, then that species will be considered to be among the X-Class beasts.

Titan of Air and Lightning

Titan of Fire and Lava 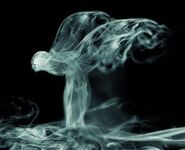 A Fire Dragon (credit goes to google for the image)

An Ice Dragon (credit goes to google for the image)
Community content is available under CC-BY-SA unless otherwise noted.
Advertisement